The village of Broadwater derives its name from the inlet of water that used to come over a mile inland from the sea. On the eastern side of the water was Sompting – ‘the village of the swamp’ where the land was boggy and inhospitable. This inlet gradually drained away, partly through falling sea levels and partly through land drainage. By medieval times, Broadwater was  a well established village with its own market. At the southern end of the parish was a small, insignificant hamlet, called Worting, later known as Worthing. When sea bathing became popular in the late eighteenth century, Worthing developed as a resort, and by 1850 had outgrown its ‘parent’ of Broadwater. Later the ‘child’ took over the parent and today Broadwater is but a small part of the Borough of Worthing with its population of over 100,000. 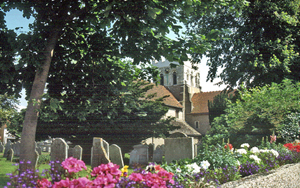 Reminders of Broadwater being an ancient parish can be found in some of its older surviving buildings and in the folklore that is still recalled in the ancient oak tree that stands close to Broadwater Green. This hollowed-out tree, found on a broad grass verge just north of Offington Avenue was reputed to haunted, but only on Midsummer’s Eve, June 23rd, as recalled by eminent folklorist, Charlotte Latham, who as a young woman in the 1820s, had been a governess in the town –

“There stood, and still may stand, upon the downs, close to Broadwater, an old oak-tree, that I used, in days gone by, to gaze at with an uncomfortable and suspicious look from having heard that always on Midsummer Eve, just at midnight, a number of skeletons started up from its roots, and, joining hands, danced round it till cock-crow, and then as suddenly sank down again. My informant knew several persons who had actually seen this dance of death, but one young man in particular was named to me who, having been detained at Findon by business till very late, and forgetting that it was Midsummer Eve, had been frightened (no difficult matter we may suspect) out of his very senses by seeing the dead men capering to the rattling of their own bones.”

It is also known that locals would only go out in pairs at Midsummer for fear of meeting unhallowed spirits from the underworld, for it was Midsummer Eve, not Hallowe’en that was considered the night for encountering ghosts and ghouls in Sussex.

Broadwater Green – once reputed to be the largest village green in England was saved for local people following an early conservation campaign in the 1860s. As Worthing expanded, so pits were dug on the green in order to extract gravel for making of the new roads in the growing town. These pits, once excavated were filled with rubbish from the new households. A local newspaper led the campaign to save the Green from further degradation, and eventually the money was raised to purchase the Green from the Lords of the Manor of Broadwater and the future preservation and maintenance of Broadwater Green was placed in the hands of the Worthing Local Board (replaced in 1890 by the new Worthing Town Council).

In the old days a raucous fair was held on the Green that lasted for several days. There was dancing, drinking, and bare-knuckled boxing matches, and groups of young people joined hands and danced round the district. These ‘runarounds’ as they known often led the revellers up onto the Downs, and particularly Cissbury Ring. One local clergyman complained that “seldom do purest motives incline youths to venture forth.” The result was a series of unplanned pregnancies and a “burden on the poor rate” nine months later, when the unmarried mothers sought financial assistance from the parish.

Some of the oldest buildings in Broadwater, dating from the eighteenth century can be found near St. Mary’s Church, which is itself a grade 1 listed building. Broadwater Manor, has, since 1930, been a private school and was recently taken over by Lancing College. Although most of the visible buildings are about 200 years old, some of the inner walls and the foundations are much older and are believed to date back to the thirteenth century.

Most of the buildings in Broadwater Street East, up as far as Forest Road, are also very old. Broadwater Lodge and 2 Forest Road, are fine examples of Georgian houses built for wealthier families. The other houses in the street are more humble in origin, yet much sought after today.

The Old House at Home has stood in Broadwater Street East for several centuries, although the present building was erected in 1926. The pub once had its own song, a verse of which has survived to posterity –

On Monday I goes out with Rosy,

On Tuesday I goes out with Jane,

On Wednesday   I goes out with a widow I knows,

On Thursday I goes out with Ryah,

And Friday I practice the choir,

But on Saturday night I get tiddly-tight,

In the Old House at Home by the fire.

The Malsters Arms and the Engineers Arms were in Broadwater Street, as was the Brewer’s Arms, which in 1878 was renamed The Cricketers, a name it retains till the present day. For well over 100 years, The Cricketer’s was run by the Medlock/ Page family. Many people still remember Wilf Page with affection, who had a great knowledge of the history and folklore of Broadwater. The last landlord before the Medlock’s was Ben Read. Locals remembered him crossing Broadwater Green at the dead of night with his dog, returning from a poaching expedition in Offington Park.

Pound Cottage in Ardsheal Road was built in 1789 and is one of only a handful of older buildings that survive in this part of Broadwater. The others were all lost to road widening in the 1930s. The name ‘pound’ refers to the fact that stray animals were impounded in the walled courtyard that still stands in front of the cottage.

The fine residential properties in Offington Avenue and Offington Drive were built following the sale of the Offington Park estate in the 1920s and 30s. Offington Hall itself was converted into flats, but then demolished in the 1960s. Hall Close now stands on the site.