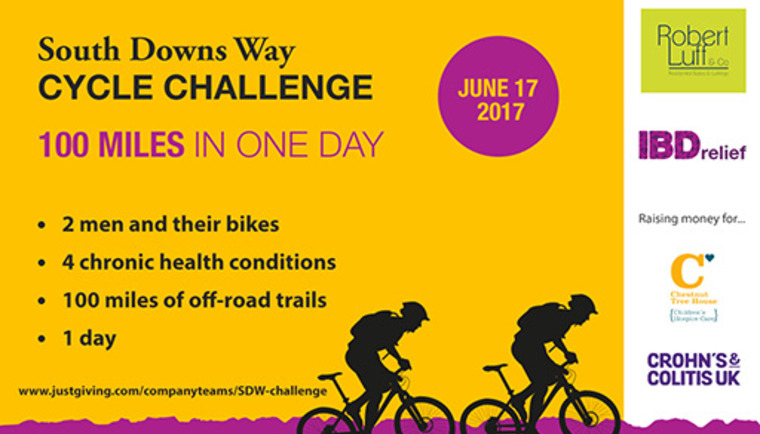 Robert Luff & Co. partner Mark Holding will be taking on the challenge of a lifetime when he cycles 100 miles across the South Downs in June.

On Saturday 17 June Mark and friend Seb Tucknott will be cycling the gruelling hills between Winchester and Eastbourne in just a day to raise money for two charities.

But, what is already a tough challenge to complete, is made even harder by chronic health conditions that both Mark and Seb live with.

Mark has ankylosing spondylitis (AS), Crohn’s disease and psoriasis, while Seb has ulcerative colitis.

These conditions cause both Mark and Seb pain and extreme fatigue which has made training more difficult.

Mark said: “I’m unable to train for something like a marathon due to the stress running places on my body. I’ve always found that cycling helps relieve some of the pain I experience from my conditions but the fatigue I experience makes it more difficult for me to get out and train.

“I’m nervous about the challenge but I’m looking forward to pushing myself harder than I’ve ever done before.”

AS is a form of inflammatory arthritis. It is a lifelong chronic condition in which the spine and other areas of the body become inflamed. Symptoms include pain and swelling and extreme fatigue. In severe cases parts of the spine can fuse together.

Crohn’s disease is another chronic condition in which parts of the digestive system become inflamed. This can cause pain, diarrhoea, vomiting and extreme fatigue. It is a form of inflammatory bowel disease (IBD).

Ulcerative colitis is also a form of IBD in which the large intestine becomes inflamed. This can cause bloody diarrhoea, pain and extreme fatigue.

Mark and Seb will be raising money for Chestnut Tree House Hospice and Crohn’s & Colitis UK.

If you would like to make a donation to either charity you can do so at their Just Giving page.

Everyone at Robert Luff & Co. wishes them the best of luck in their challenge and I’m sure many of us will be turning out on the day to offer our support along the route.