Heene Terrace was built in 1865 from the designs of the architect, G.A. Dean. Together with the Burlington Hotel, Heene Terrace marked the first development of ‘West Worthing’, which at that time was still separated by fields from Worthing proper, which ended at the Old Coastguard House. The West Worthing Commissioners were empowered to drive forward this new development and to erase the memory of ‘Little Heene’ – a motley collections of dilapidated hovels that stood on the site of present-day Thorn Road and Brunswick Road. It was said the inhabitants were dissolute smugglers who disparaged all lawful employment and spent their days drinking in the Rambler Inn. 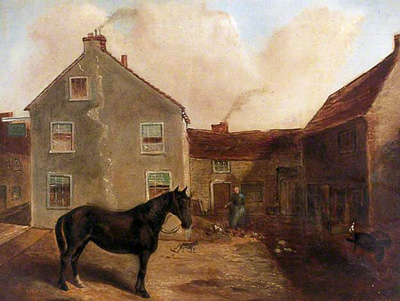 The Commissioners soon achieved their goal of attracting residents of quality to their growing suburb. By 1871, 11 Heene Terrace was the home of Captain Thomas Goodrich and his family; while next door at number 12 lived John Romanes and his family, who had recently returned from Canada. Romanes died in 1886 leaving £2,600 in his will (equal to £260,000 in modern money).

A change in use of both numbers 11 and 12 Heene Terrace took place shortly after the end of the Great War. Number 11 became a hotel called ‘St. Ives’ run by Mr. W.J.Leeper, while number 12 was the Queens Private Hotel run by Mr. Elkins. Some years later Elkins purchased the Queens which was incorporated into the St. Ives Hotel. 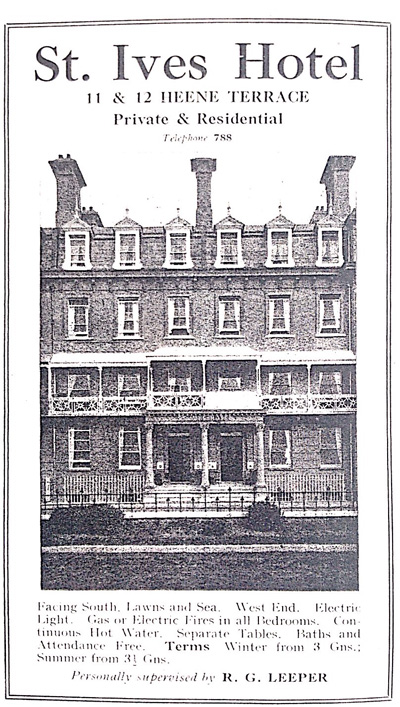 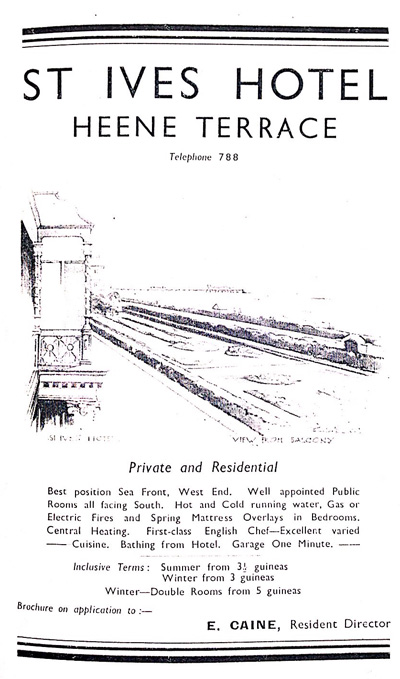 In 1930 a hotel called the May Fair was opened by Gertrude Essex at 45 Wordworth Road, and boasted in its publicity material that it served ‘English meat only’. At the same time the St. Ives was offering its prospective guests ‘continuous hot water’ and ‘separate tables’ for dining (presumably other hotels of the day could only offer communal tables).

By 1938 the St. Ives was being run by Elizabeth Caine, and was enticing guests with ‘spring mattress overlays in the bedrooms’ (probably topping horse-hair mattresses). She promised patrons ‘excellent varied cuisine’ prepared by an ‘English chef’.  By 1955 Mrs Caine had provided all the rooms with ‘interior sprung mattresses’ and a television in the lounge. However the summer weekly tariff had risen from three and a half guineas a week to up to nine guineas in the peak season.

In about 1960 both St. Ives and the Mayfair hotels were purchased by Mrs P. Vernon. The name of the St. Ives was changed to the Mayfair, while the old Mayfair was converted into a nursing home. By 1967 the Mayfair was marketing itself as a ‘quiet hotel’ which had recently had a ‘passenger lift’ installed. By the 1970s a Mr. and Mrs. Campbell Williams were the proprietors and had colour televisions put into every room. They offered ‘private showers’, and, somewhat curiously, advertised that ‘toilets’ were ‘available’. 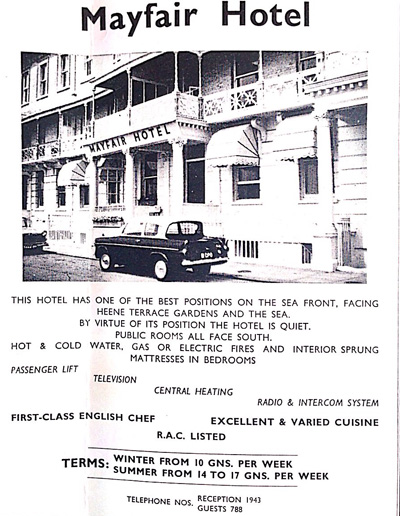 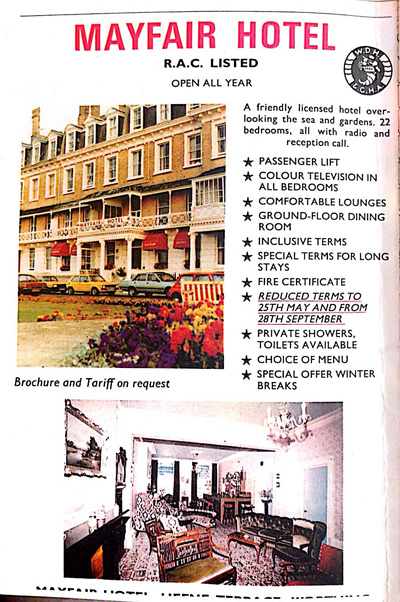 The last proprietors were Derek and Jill Jarvis. This writer recalls running adult educations classes at the Mayfair in the late 1990s in a room that now forms the lounge/ dining area of Apartment Three in the now fully restored a modernised Mayfair.

Special thanks to Chris Hare, Local Historian for this article.