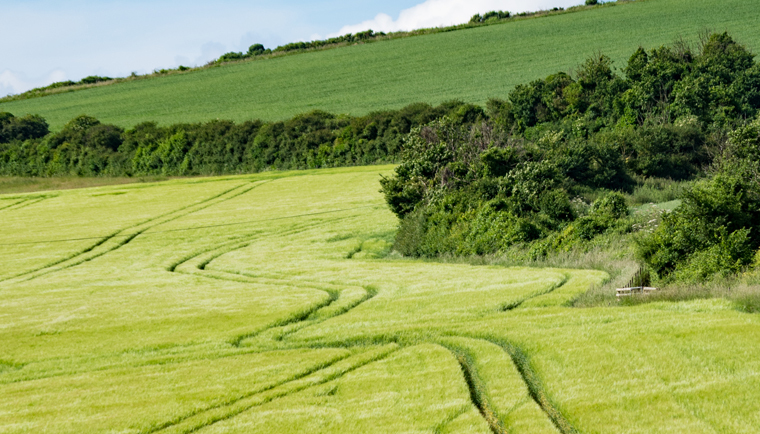 Standing amongst the grassy pasture land on the lower slopes of the South Downs National Park and listening to the sound of the Morris Dancers carried on the breeze and the church bell,  it was easy to appreciate why we had made the decision to relocate to this lovely rural setting.

Sompting is situated in the Adur District of West Sussex between Lancing and Worthing. Its name comes from 'sumpt' meaning 'the settlement of dwellers on the marsh'. The first written mention of the village has been found in a document dated AD986. And in the Doomsday Book (1086) it is referred to as Sultinge. The area used to be marshy because it was on the floodplain of the Broadwater River, but over the centuries, the river changed its course. Nevertheless, to ensure against any possibility of flooding, a half mile wide tract of land across the plain from the river bank has been left clear of any development.

The beautiful - and famous - parish church of St Mary the Blessed Virgin stands on the edge of the village and is separated from it by the A27. Nevertheless, the distinctive four-faceted pyramidal cap on the church tower  known as a 'Rhenish Helm' (the only one in England) makes it instantly recognisable. The church was first built by the Saxons in AD 960, was later adapted by the Normans, given to the Knights Templar in the 12th century and to the Knights Hospitaller in the 15th century who adapted it further. During the First World War a prisoner of war camp was established in the village.

With such a long history, there are a number of interesting buildings to see including Sompting Abbotts which was built in 1856 on the site of the old manor house and is further up Titch Hill – beyond the church. Sompting Abbotts is now a preparatory school, whilst the Rectory is now a nursing home.

The Parish includes the hamlet of Beggars Bush, but over the years as Sompting has grown, it now includes the hamlets of Upper and Lower Cokeham. The eastern boundary of the village is very clearly defined by Boundstone Lane which was where the boundary stone once lay and on the other side of the lane is the edge of Lancing. Whilst Sompting remains a village with just a handful of shops and convenience stores, schools and three doctors' surgeries, it is conveniently close to Worthing (4 miles), Brighton (9 miles) and Arundel (9.5 miles) which all have a wealth of resources. For commuters, the train from Worthing to London Victoria take 90 minutes.

Whilst the centre of village has retained its original character, many newer developments have sprung up around it. There is a good variety of properties including many attractive semi-detached and terrace houses. According to Rightmove, the average price for a semi-detached three bedroom property in Sompting in 2018 was £302,163 – making property prices similar to Lancing, but noticeably cheaper than those in Worthing.

Sompting lies close to the sea with all the advantages that this brings including great water sports facilities in Worthing. Sompting has its own recreation ground and sports facilities with play areas for both younger and older children and multi sports facilities including football pitches. The village has a popular beer and music festival on the first weekend in June and hosts the equally popular Mummers Play performed by the Sompting Village Morris Dancers who are amongst the best in Sussex. If you still need convincing that a move to Sompting is definitely worth considering... there are three really friendly pubs in the village.

Article provided and written by Chris Steven. This content has been provided to us by the writer. Whilst believed to be factually correct, we cannot accept responsibility for content contained within it.