The War Memorial in Worthing

The names on Worthing War Memorial could be just names – a forgotten series of inscriptions now passed from living memory – were it not for an invaluable archive kept at Worthing Museum.  Here can be found all the original forms that had to be completed by relatives wishing to have a loved one’s name included on the new memorial.  These forms contain much detail and are an essential resource for anyone studying the Great War in Worthing. 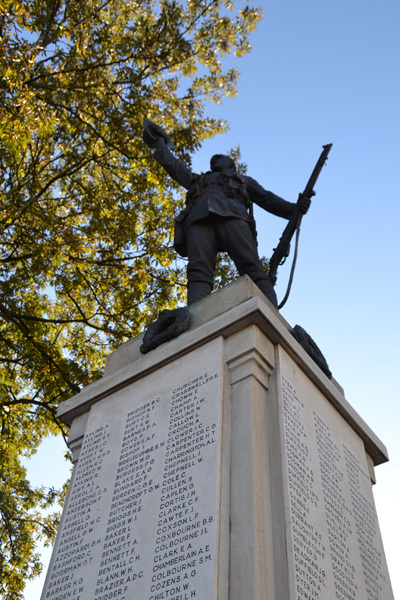 There are over 600 forms and each one is a testimony to a young life cut short by war.  The first victim was killed while still in Worthing.  Arthur Wright of Church Walk was killed on August 14th 1914 while ‘protecting the railway line’, although the exact circumstances of his death are not recorded.  The last fatality of the fighting was naval rating Frederick Dredge of 11 Elm Grove, who was serving on HMS Britannia when it was torpedoed off the Straits of Gibraltar on 9th November 1918.  The news of Fred’s death reached his family two days later on 11th November – the day the armistice was declared.

There are nearly thirty names on the memorial of men who died after the fighting was over – either of their wounds or ill health aggravated by their war service – typically pneumonia and influenza.  Pity especially James Butcher of Penfold Road, who served for 19 years in the British Army, including the horrors of the trenches, only to die, physically exhausted in March 1919. 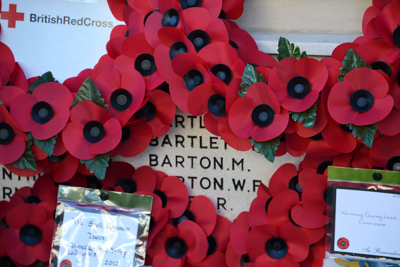 Not all the ages of the deceased are given, but John Bishop of 11 The Drive was probably the oldest person to have his name included.  Bishop, like Butcher had been in the professional army and had served his time fighting the wars of empire in Africa and India.  He was 52 years old when he died of pneumonia.

Some of the forms contain only basic information, but others give, often tantalizing clues about the deceased.  What one wonders drove Corporal Herbert Carpenter to die “of heartbreak in Mesopotamia” in August 1918?  George Swain of 15 Winton Place was “killed in action in Tower Hamlets” in November 1917” – possibly the result of a Zeppelin raid? Charles Tuck of 58 Teville Road, “drowned with (Lord) Kitchener on HMS Hampshire” in June 1916.  William Daughtrey was “killed by a comrade in India” in January 1915, whether this was deliberate or accidental is not made clear.

The Battle of Richebourg – a diversionary tactic the day before the start of the Battle of the Somme – claimed many Worthing lives.  In was known as ‘the day that Sussex died’ and was the county’s darkest day of the war.  The relatives of Herbert Short of 136 Tarring Road, who died in France in March 1918, wrote that they were “Thanking the Town Council for the trouble they are taking to prepare a certificate which we shall be proud to receive.” 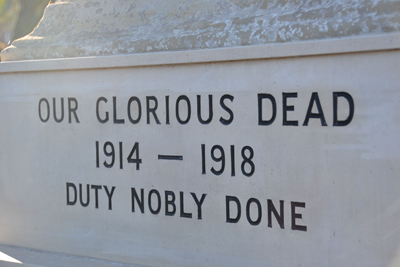 Is this the response of a grateful family to a certificate they knew was coming, or is a subtle rebuke to a Council that had not yet issued them? How many more tragic stories must there be of lives cut short by the terrible events that commenced 100 years ago?